With the U.S. midterm elections now less than two weeks away, patient advocacy groups are solidly focused on a range of hot-button issues, from the Orphan Drug Tax Credit and affordable health insurance to future funding for rare disease research.

Yet “whether Democrats take over the House or Senate, or Republicans stay in control, no matter what, we’ll still have a Republican-controlled White House and a deeply divided Congress,” said Sara Singleton, director of policy at the Cystic Fibrosis Foundation (CFF). “That means there might be a lot of talk and noise, but when it comes down to it, only a very small subset of bills will make it into law.”

Singleton, a former deputy assistant secretary at the Department of Health and Human Services, was one of three participants in an Oct. 16 panel on the midterms, “Federal Policy Priorities and Election Implications.” Attended by 800 people, it took place during the two-day 2018 NORD Rare Diseases & Orphan Products Breakthrough Summit in Washington, D.C. 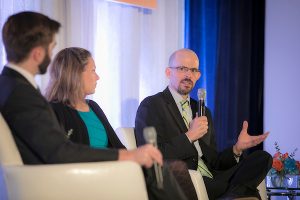 “Both houses of Congress are up in the air right now,” said Melmeyer, alluding to a recent poll by FiveThirtyEight that gives the Democrats an 84.8 percent chance of regaining control of the House on Nov. 6 — and a 15 percent chance of taking over the Senate. “Regardless of the outcome of the elections, there will be a very narrow majority one way or another, so it’s unlikely that any major legislation is going to pass. Healthcare is a very politically fraught issue right now.”

Since 1983 — the same year as NORD’s founding — the Orphan Drug Tax Credit has allowed sponsors with orphan designation to collect federal tax credits for expenses incurred running clinical trials of potential therapies for the indicated rare, or orphan, disease. According to NORD, this tax credit substantially lowers the cost of drug development, and that without it, 33 percent fewer rare-disease therapies would have been developed.

Melmeyer noted that in late 2017, Congress slashed that credit in half, from 50 percent of R&D costs to 25 percent, after House lawmakers supported a bill that would have eliminated it entirely. The Joint Committee on Taxation has estimated the partial repeal will save American taxpayers about $29.7 billion between now and 2027.

“Given that this was the very first cut to the Orphan Drug Act in 35 years,” said Melmeyer, “we want to make sure it doesn’t happen again — and that lawmakers on Capitol Hill understand the importance of this law.”

Ron Bartek, co-founder of the Friedreich’s Ataxia Research Alliance (FARA), said that in the past month, Congress passed an appropriations bill that added $2 billion for the National Institutes of Health (NIH) in fiscal 2019.

“This is so much more fun than talking about a 75 percent decrease, which was in the conversation only a year ago,” said Bartek, who served on NORD’s board of directors for 20 years. “It’s not just the obvious places within NIH where research will be increased; all 27 institutes and centers with NIH do research on rare diseases.”

He added: “Because of expressed bipartisan support on this issue, I don’t think a switch in power in either the House or Senate — or both — would have dire implications for the NIH or FDA [Food and Drug Administration] budgets. We will continue to build strong bipartisan support for research.”

Bartek said FARA supports a bill, H.R. 5115, now pending in the House. If passed, the measure — also known as the Rare Act of 2018 — would accomplish four things:

RDCRN is an umbrella group of 21 consortia that have networks of clinical trial sites around the country. Together, they focus on just over 200 rare diseases, from amyotrophic lateral sclerosis (ALS) and Charcot-Marie Tooth disease to Sanfilippo syndrome and X-linked protoporphyria.

“With that additional $2 billion, the NIH could do more for those 200 diseases,” he said. “One of the few criticisms of the RDCRN is that there’s not enough money for each of these consortia to do significant clinical research. Initially, it was restricted to non-interventional studies that would produce natural histories.”

While this continues to be extremely important, said Bartek, “in anticipation of this additional money, very innovative people at NCATS are already considering programs that would go far beyond that. For example, we could be doing gene therapy clinical trials in the RDCRN.”

During 2018, said Melmeyer, important legislation continued to gain support, such as the RARE Act, the Medical Nutrition Equity Act, and the Advancing Care for Exceptional Kids (ACE) Act.

Melmeyer praised the FDA’s efforts to further integrate patients into the drug development and approval process. But he criticized “administration activities that weaken access to affordable, quality insurance for individuals with pre-existing conditions.”

At issue is a lawsuit that seeks to undo protection under the Affordable Care Act (ACA) for pre-existing health conditions. The case, filed by the attorney general of Texas and supported by the Trump administration, argues that Congressional elimination of the tax penalty for violating ACA’s requirement that most individuals have insurance invalidates the rest of the law as well. Yet according to an Oct. 18 report by Bloomberg, “numerous polls show that healthcare is the No. 1 issue for voters in the 2018 midterm elections, and that protecting those with pre-existing conditions is overwhelmingly popular across party lines.”

The article points out that Democrats believe insurers should be required to cover a minimum set of benefits without price discrimination based on medical history, while Republicans generally favor relaxing those rules as a way to reduce premiums for healthier people.

This means that before, if a patient had cystic fibrosis, “the insurance company could say ‘no, we’re not going to sell you a plan,’ or ‘we will, but it’s going to cost you,’ or ‘we’ll sell you a plan, but we’ll still exclude services,’” Singleton said. “But on the Hill, I don’t see a risk in the short term. It’s safe to assume things are going to stay in place.”

Several Republican senators have gone on record to oppose the Texas lawsuit, including Tennessee’s Lamar Alexander, chairman of the Senate Health Committee.

Cancer Activist: ‘Be Vigilant’ on RTT

Another controversy that dominated this year was the Right-to-Try Act, which President Trump signed into law on May 30.

Passage of national Right-to-Try (RTT) legislation — following the approval of similar laws by 40 states and the staunch backing of the Phoenix-based Goldwater Institute and Trump himself — pleased many rare disease patients and their families who successfully argued that terminal or life-threatening illnesses left them no other option. But NORD opposed RTT, arguing its passage would remove FDA oversight from the process.

Mark Fleury, a policy principal for the American Cancer Society’s Cancer Action Network, said people don’t qualify for clinical trials for a variety of reasons, often leading them to turn to therapies that are still in development but not yet approved by the FDA.

“Based on discussions with their doctors, they have some reason to believe an unapproved therapy might help their condition. Traditionally, there’s been a way to access this: compassionate use or expanded access,” Fleury explained. “A lot of folks have been frustrated and have tried to make that process easier.”

The FDA is not the main hurdle to acquiring such treatments, he said, with the agency approving 99.9 percent of all requests, “and if it’s an emergency, they’ll do it right there on the phone.”

More typically, he said, it’s the manufacturer that decides, for whatever reason, not to provide the therapy. But now that RTT is the law of the land, he warned, “there’s a very real possibility a patient could get taken advantage of by those who do not act with patients’ interests in mind.”

Fleury added: “We need to be vigilant and make sure folks get access to drugs in a safe way. It’s on us to keep our eyes wide open.”