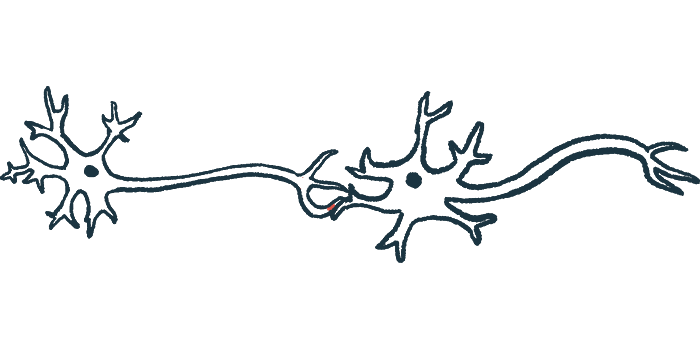 Two independent teams of scientists have unraveled the molecular mechanism by which abnormal localization of the TDP-43 protein, which is characteristic of amyotrophic lateral sclerosis (ALS), leads to reduced levels of another protein, called UNC13A, that is important for nerve cell function.

The results also show that certain variations in the UNC13A gene, which are associated with ALS, are more susceptible to the effects of abnormal TDP-43.

“Here, we see two independent research teams converging to explain how [genetic variations] can be a critical factor contributing to an entire class of neurodegenerative diseases, as well as a potential therapeutic target,” Thomas Cheever, PhD, program director at the National Institute of Neurological Disorders and Stroke (NINDS), said in a press release.

The findings were published in a pair of studies in Nature, titled “TDP-43 loss and ALS-risk SNPs drive mis-splicing and depletion of UNC13A” and “TDP-43 represses cryptic exon inclusion in the FTD–ALS gene UNC13A.”

The protein TDP-43 normally resides in the nucleus (the compartment that houses a cell’s DNA), where it helps to regulate how certain genes are “read.” In almost all cases of ALS, however, this protein forms abnormal clumps outside of the nucleus. These aggregates of TDP-43 protein also are characteristic of a related disease called frontotemporal dementia (FTD), in which parts of the brain atrophy or shrink.

The UNC13A protein, encoded by a gene with the same name, plays an important role in maintaining the health of synapses, the connections between nerve cells where nerves communicate with each other. Certain genetic variations in the UNC13A gene have been linked with an increased risk of ALS and FTD. However, the biological mechanism underlying these associations has not been clear.

Now, two separate groups of researchers have shown that the reason has to do with how TDP-43 regulates the expression of UNC13A.

Within a cell’s DNA, protein-coding genes like UNC13A are made up of exons — the parts of the genetic code that provide instructions for making the protein — that are interspersed with non-coding segments called introns. When a gene is “read,” the entire sequence is copied over into a temporary molecule called messenger RNA (mRNA).

Before the mRNA is sent to the cell’s protein-making machinery, it undergoes a process called splicing, where all of the introns are removed, and the exons are strung together to produce the mature protein-coding sequence. Normally, TDP-43 in a cell’s nucleus aids in the process of splicing mRNA from the UNC13A gene.

Both research teams demonstrated that, when TDP-43 is lacking in the nucleus, a small extra sequence called a “cryptic exon” gets erroneously included in the UNC13A mRNA. As a result, the mRNA is unstable and gets rapidly degraded, and ultimately, cells make substantially less UNC13A protein.

The scientists also showed that certain variations in the UNC13A gene that have been linked with ALS make the mRNA more susceptible to the inclusion of the cryptic exon when TDP-43 is missing.

“These results provide direct functional evidence that TDP-43 regulates splicing of UNC13A … and that genetic variants associated with ALS and FTD susceptibility in humans potentiate cryptic exon inclusion when TDP-43 is dysfunctional,” one team concluded.

“The ensuing loss of UNC13A protein — which is critical for normal synaptic activity — at earlier disease stages may explain the associated risk effect of these [genetic variants],” the other group wrote.

According to this team of researchers, this finding suggests that the cryptic exon in the UNC13A gene is “a promising target for therapies that modulate splicing, potentially applicable to 97% of ALS cases and approximately half of FTD cases.”

“These findings are also of interest to other neurodegenerative diseases — such as Alzheimer’s disease [and] Parkinson’s disease … — in which TDP-43 depletion occurs in a substantial fraction of cases,” they wrote.

The researchers used genetic tools to create one of the models used in their study.

“We have built on years of genetic research that identified that UNC13A was implicated in motor neuron disease and FTD and supported it with a new molecular biology finding that confirms that the gene is absolutely fundamental to the disease process,” said Michael Ward, MD, PhD, a scientist at NINDS and a co-author of one study.

The studies both suggest that developing new ways of increasing UNC13A levels could potentially be effective in ALS.