Health Canada asked more information regarding masitinib as a potential add-on therapy for amyotrophic lateral sclerosis (ALS) before continuing to review a request for its approval.

AB Science, masitinib’s developer, now has 90 consecutive days to reply to the notice of deficiency issued by Health Canada, given when agency regulators consider an application in an ongoing review to be incomplete or insufficient.

As such, Health Canada noted on its website, a notice of deficiency differs from a notice of non-compliance in that it pauses a review before a decision is made, allowing time for requested information to be given the agency and the review to resume. A notice of non-compliance is issued after a review of data — typically supporting an investigative treatment’s safety, efficacy, and quality — has finished and were found insufficient.

AB Science will work with the Canadian health authority to provide the requested information within the deadline given, it announced in a company press release.

Masitinib is an oral medication that blocks the activation of tyrosine kinase, an enzyme that’s essential for the function of certain immune cells that drive inflammation in ALS. By suppressing these cells, the therapy is expected to slow disease progression and ease ALS symptoms.

A similar application is being reviewed in the European Union, marking the second time the treatment is up for conditional approval there. If granted, the therapy will be sold in Europe under the brand name Alsitek.

The applications are supported by data from the AB10015 Phase 2/3 clinical trial (NCT02588677), which tested two doses of masitinib against a placebo, in combination with Rilutek (riluzole), over 48 weeks (about one year). The trial enrolled 394 ALS patients.

This combination given to patients with milder disease also extended survival by over two years, corresponding to a 44% reduction in the risk of death.

A Phase 3 trial, called AB19001 (NCT03127267), is ongoing to confirm these results in a larger ALS patient group:  up to 495 adults with mild to moderate functional impairments and diagnosed within the last two years.

Participants are being randomly assigned to masitinib at 4.5 mg/kg dose, masitinib at 6 mg/kg, or to an oral placebo, with each given in combination with Rilutek for the trial’s duration, about one year.

After a pause due to heart-related safety concerns, patient enrollment resumed with changes in protocol that include closer monitoring of heart health. The Phase 3 trial’s main goal is to determine if masitinib can slow disease progression; secondary measures include quality of life, changes in respiratory function and muscle strength, and survival.

This study is expected to conclude in December 2023.

How We’re Taking On New Precautions for ALS Progression 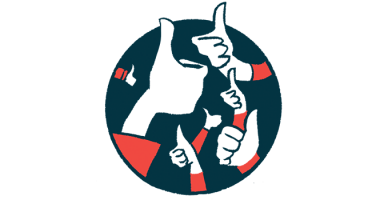